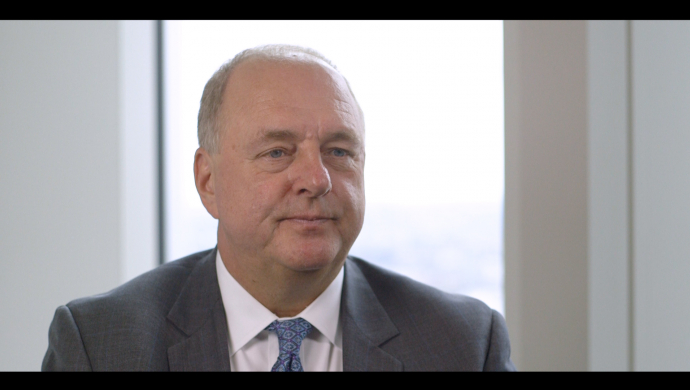 WATCH LATER
Bill Kanko, Founder & President, Black Creek Investment Management sat down with Mark Colegate to talk all things investment. Bill touched on the impact of central banks on the industry, potential concerns for the next 12 months & more.

PRESENTER: I’m joined now by Bill Kanko. He is Founder and President of Black Creek Investment Management. Bill, talk us through your particular style of running money with this mandate.

BILL KANKO: We take the approach that we’re buying businesses; we’re not trying to flip pieces of paper for short term gain. And so it’s a very fundamental approach in which we look out five or 10 years asking the question: what is this company going to look like five or 10 years out? And there’s two distinctive parts to our process that I think differentiates us from competitors. First of all we’re looking for what we call winning businesses. And these are companies that provide a value proposition to their customers and tend to be gaining market share so winning against their competitors. So that’s one aspect for what we’re looking for. The second distinctive aspect is that we have to have some view of that company that’s different from other investors, some view that’s not shared by everyone else. Because if it is shared, if everyone knows it’s a great company, then it’s going to be in the price.

So we have to have some unique insight about a particular company that enables us to say this company is going to be much bigger and more profitable in the future to the surprise of other investors. So those are two key distinctions that make us different. And then lastly we focus our efforts. So we have always managed very focused and concentrated portfolios. We don’t want to own 200 companies or more, because then you just look like the index. I think the only way you can beat the index over time is by having focus in a portfolio.

PRESENTER: How tough an environment has it been over the last 12 months; there’s been some pretty volatile times in there?

BILL KANKO: For about the last 18 months, or even longer, the world has been characterised by very easy monetary policy on the part of central banks around the world. And what that has done has taken interest rates to historic lows, and to the point where we see negative interest rates in parts of the world, and that’s never been seen before. And so this very easy monetary policy has had the effect of buoying markets. It’s had the effect of providing capital to all sorts of businesses, and it’s buoyed stock prices to the point where we’re starting to see some froth in certain parts of the market.

PRESENTER: So how important is balance sheet strength to you, given the uncertainty that you’ve been describing?

BILL KANKO: Balance sheet strength has always been very important to us. You’ll find in the portfolio we will buy companies that have a certain degree of leverage, but for the most part the portfolio is under-leveraged. Ten years ago in the crisis period we passed on a lot of ideas for the simple reason that the balance sheets we thought weren’t strong enough, and we didn’t know if those companies would survive. But they did get bailed out by the central banks effectively with easy money, but that’s unusual I think.

PRESENTER: Any other broader concerns that you’ve got right now, such as the Trump/China trade war for example?

BILL KANKO: Well the trade war with China, I guess in particular the US against almost everyone else, but I think they’re focused on China. And I think there is merit in some of what the administration is trying to do, because China has been skirting some of the rules in terms of being a most favoured nation under the WTO. But they’ve been skirting the rules, and I think the US is concerned that if something isn’t done now, then China will continue to take advantage of other countries, especially when we’re talking about intellectual property and state subsidisation of industries. So I think the US is probably right to focus on some of these issues, but it certainly causes a lot of uncertainty in the marketplace as to whether or not a deal is going to get done. I think a deal will probably get done, and the world is not coming to an end, but it’s just difficult to manage on a week to week or month to month basis when a deal hasn’t been done.

PRESENTER: You like to take a five to 10 year view on companies, what gives you the confidence to do so when as you’ve said it’s very difficult to know what’s going to happen in the next six months?

BILL KANKO: Well I think there’s a universe of analysts and portfolio managers and investors out there who are focused on the next three months or six months. And everyone’s concerned with their earnings estimates and consensus earnings, and so it becomes a bit of a guessing game to say yes a company’s going to meet earnings or exceed it, and it turns into a momentum-type investment universe. Whereas I think if you take a longer perspective, take a company’s history, the nature of the industry, I think you can get a better sense of what might happen over five or 10 years, especially if you find a company that is doing something to win relative to its competitors. If a company is investing for growth, either through R&D or capital spending or marketing spending. If a company is doing certain things to gain against its competitors, then you might be able to say yes this company’s going to be a winner five or 10 years out. And you’re certainly going to be able to say that this company’s going to survive whatever happens five or 10 years out. And so that’s a starting point for us.

PRESENTER: And given your approach, does that mean there are particular sectors that you tend to find stocks in?

BILL KANKO: We tend to be contrarian by nature. And so we look in those parts of the market where other investors aren’t paying a lot of attention or where expectations are very low. So if everybody hates a stock, or hates a particular area, we’ll look in those areas. Whether it’s a geography or a sector, we’ll look and try and see if we can develop an idea in that sector. We tend to stay away from those parts of the market that are very favourable, very popular, and where expectations are high, because then it’s typically in the price already.

PRESENTER: What’s been your best performing stock in the past year?

BILL KANKO: I’d have to say it was Booz Allen Hamilton, which is a US consulting company. Most of their business is with various agencies of the US government, and they’ve been dealing with the US government for many decades. They have certain capabilities that other companies don’t have. They bring those capabilities to bear in a team oriented culture, and so they solve problems for the government. And we bought the stock when it was under a cloud for accounting irregularities, which we don’t believe because they’ve been dealing with the government for a long time. And so there was an opportunity to buy a stock in a company that had been investing in capabilities, investing in people, and ramping up for future growth, and that is now starting to happen. Their growth has exceeded expectations over the last 12 months or so, earnings are great, so the stock is up significantly for us in that time period.

PRESENTER: So when you look at a stock like that, what’s your sell discipline?

BILL KANKO: Well our sell discipline tends to be find a better idea. So if we’re looking around the world for ideas, if we find something that we really want to own, and we think it’s a better idea than something at the bottom of our list, then we’ll sell our least favourite idea in order to buy a new idea. And so it’s that constant culling or upgrading of the portfolio as you go along. We’ll sell if we think we’ve made a mistake on the idea, and we’ll sell if it gets to a price where we see no prospect of return over the next three to five years.

PRESENTER: How much stock rotation has there been in the portfolio over the last 12 months?

BILL KANKO: I think over the last 12 months we’ve sold and bought five holdings on both sides, which is about 25%, which works out to about what our average turnover is over time. So we tend to have fairly low turnover. The five stocks that we’ve bought recently are DS Smith; DKSH, which is a training company in Thailand, or most of its business is in Thailand; IPG, which is an advertising agency; [Okida? 0:08:33], which is a power tool maker; and [Rada? 0:08:36] Manufacturing, a Japanese maker of electronic components.

PRESENTER: So, in summary, what are the main potential risks and rewards that you’re keeping a close eye on over the next 12 months?

BILL KANKO: Well I think there are always various issues to be concerned about, and we’ve talked about a few like the trade agreement or the trade war. But I think the most unsettling part of this market for me is just the unusual monetary conditions that we have. Central banks have been falling over themselves to provide liquidity to markets in the hope of boosting economic growth. But that doesn’t seem to be working. It’s not really working for the overall economy. And that money is making its way into various financial markets, so stock market in particular, driving down interest rates to the point where we have negative interest rates in a number of countries. And this is tending to buoy stocks in the short term, and tending to create pockets of froth in the stock market. But ultimately this easy money is going to drive down margins and drive down returns for companies. And so we’re reaching a point where the short term is going to turn into the long term, and it’s hard to know what’s going to happen because of these easy monetary conditions. Something has to give, but I’m not sure what that is.