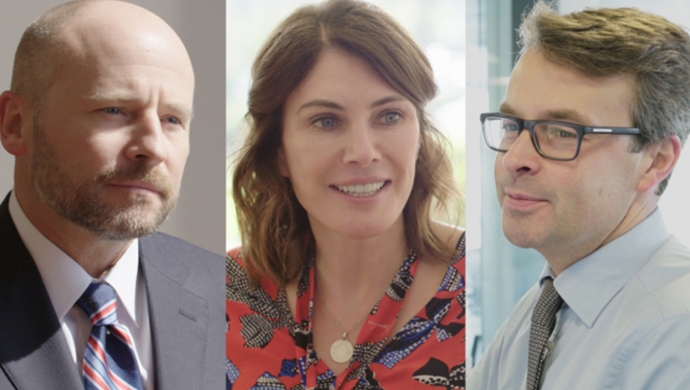 There's two aspects about my day to day job as a portfolio manager that really excited. One is helping christ achieve their return objectives, but also creating or cif societal change. We can make the world a better place, and that is something that is very, very exciting for for me as a parent and for us as we all look to the future. Sg stands for environmental social and governance factors that can impact the creditworthiness off issuers those issuers those credits that pay a lot of attention to environmental and social factors. In addition to governance stand to be better strategic long term thinkers, and we believe make better investments pimco's investment process eyes based on what we call our secular view of the world, which is three to five year view of the world. A lot of the factors ni sg tend to be very long term in their nature, so there's a natural philosophical alignment in the way that we've always thought about managing portfolios on more explicitly incorporating sg into that process. When it comes to credit research the way we influence. The bottom up poor further construction is to fully integrate ras g group in the portfolio management team. It's not a siloed activity with an sg team sitting separately, so we built up our research capabilities, and we now have our own internal sg ratings for all different sectors of fixed income. We think of ari sg team is simply one of the specialist desks at pimco. So for the general group we have a lot of interaction between ourselves and the team, but also we have a course that dedicates the sg strategies with dedicated sg portfolios. We believe you don't have to give up risk adjusted performance. Pimco's sg platform is really, but on three pillars exclusion, which is the first thing most people think about you know which things you would not include. In the portfolio. If you were sensitive tost types of risk, and then we also have evaluation in that framework, we're using our internal research and sg scores to identify who is moving up in terms of their performance. And those are the types of issuers we want to focus on and then the last pillar, and this is really important. His engagement and through this engagement were very focused on the u n sustainable development goals, so we're very much promotion. Std reporting among issuers to ensure that their portion shows how their business strategy is aligned. With the s. T j. It's going to take several trillion dollars a year to achieve those goals and a good portion of that's going to need to come from the bond market. Now, pimco has that ability to influence those issues because they want us at the table when they come back to raise more money. We think that gives us a very, very strong ability to positive influence over time. For example, i engaged with this business. One of the largest aircraft lisa is in the world because they had quite a poor sg racing mostly because they did not produce a sustainability report on through our discussions. We established that this business was very much aligned with sustainability that two thirds of its aircraft would have the lay schist energy efficiency technology by twenty twenty one. Our coverage analyst had a very positive view on this business, and i think that this was a very good example off the benefit ofthe management being transparent in terms of these psd issues. The g factors are an integral part of good investment management. We believe not only can we build better portfolios, but we can also move issuers along faster. Raised the bar in terms of ust performance for not just an individual credit, but the entire industry bonds is what we do on making positive societal change is what we want to see. Oh.