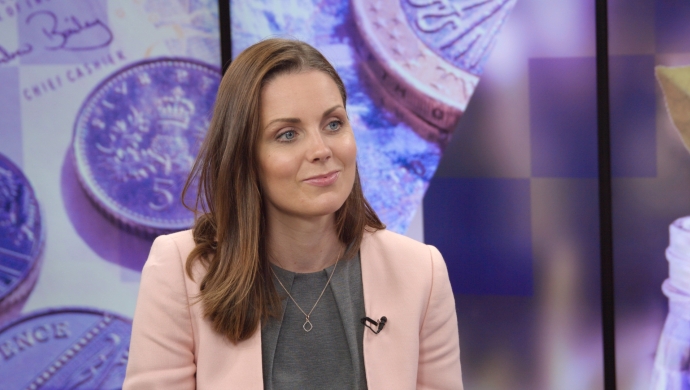 WATCH LATER
Alison Hatcher, Global Head of Corporate Sector, HSBC Global Asset Management, joins Mark Colegate to discuss the risk that ESG brings to trustees, how broad the definition of ESG is and what trustees should be doing between October 2018 and October 2019.

No. No. I'm Joined Now by ALISON HATCHER Part of the global climate strategy team at HSBC Global Asset Allison The D. W. P now considers SG to be a systemic risk to pension schemes. What obligation says that Put on trustees. What's really interesting is that the deed of BP have recognized that there is a lack of consistency, both within policies and processes. But also it's just a very confusing market at the moment, with variety of funds. So what they've done is have stepped in because they want to help trustees, helped them with some guidance and help them understand not just the long term financial risks of SG and the impact on the portfolio, but also how they can manage those risks on DH. What they've done is they've created some new obligations on the trustees themselves. So there's some new legislation on that's divided into multiple different areas. The first one is that by the first of October two thousand nineteen, so there's a nice period of time to get this in order. The trustees are to create some policies of how they're going. Teo. Think about the financial and material impact, or V S G. On their portfolio on this financial material impact is a very important statement because it is in essence saying that long term, well governed and well managed companies will outperform those that are not. And it's helping to trustees to understand that this is actually a long term risk, and it's good governance. They then have to look at the policies that they have in place around stewardship around voting and also around asset managers off the money, because it's not just good enough that they outsource the responsibility, they have to make sure that those asset managers or governing the risks in the right way then as off the October two thousand nineteen, they will have to make this public and put it online, which is lovely. And Martin Andi at the same time, they will have to create, say, a roadmap of how they're going to implement some of these policies. And I think that's really important because it's not just about having the policy is about how they're going toe, implement it and this is on their overall portfolio. But specifically and importantly for DC it the legislation rule cut, pulls out default funds We must look at this now for default funds as well, very quickly on yesterday. How broad is their definition? Because we're beginning to hear about people who got sustainability or impact investing. Does that all fit in the same category so beautifully for government government? They don't actually give you a definition. What they say is they say SG, including climate change, and I think that's the point that I that we should really focus on here is that they clearly think that climate change is a very immediate risk, which is why they're pulling it out for specific consideration. But it's a very broad definition. We're giving these obligations on trustees walk and asset managers to help. I think really, the importance now of asset management of asset management companies working with trustees is immense because there's no way they're going to be able to do this on their own. And they shouldn't because, in essence, the asset owners are outsourcing the management of the money to the asset managers. So they absolutely should have very strong stewardship policies, voting policies. And they'll have a lot of examples of how they are helping with sustainability. So we first have to consider the fact that there's some education to be done, there'll be different it trustees at different levels of knowledge. So we can help with the education that we got a bear. Mind that asset managers have not only expert teams but also individuals doing stewardship, looking just a voting. So it's important to utilize these tools. We can then consider also how to help with some of the policies. What is usual? What It's standard. It is Aaron templates that could be used. We can then consider helping in other areas sort of portfolio reviews because sometimes it's not about adding an extra fund. It's about potentially just tweaking some of the investments that already in existence or creating smoke delays. We can help there as well. We can consider also the reporting, because ultimately all of this information on the portfolio side is going to have to be reported back in the chairman's statement. So getting that reporting right, what is it that they want to see in there? Chairman statement. How could make their lives a lot easier? And finally I would say around communication because communication is going to be extremely important when considering default funds and we've touched on this before about the emotional connection between investments and also then making more engagement from the underlying members. And I think with this particular subject matter, it's a case of good governance actually creates riel life good consequences, which is something that we all want to feel and see with our financial investments. So in summary between now and October twenty nineteen, what should trust you? Be doing that? Create their considerations and policies. So they've got to think about how they're going to manage that long term risk, how they're going to mitigate it and put in practical plans of action of what that's going to look like. Allison Hatcher. Thank you. Thank you very much.