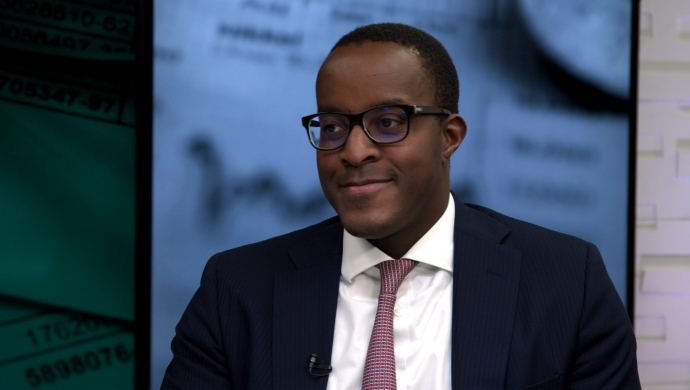 WATCH LATER
Quantitative Equity Analyst, Obe Ejikeme gives an insight into where we are in the cycle right now, central banks' behaviour & his outlook for the equity market over the next 3-6 months.

PRESENTER: Obe Ejikeme is Global Equity Quant Analyst at Carmignac, he joins me now. Obe, where are we in the cycle right now, what are your models telling you?

OBE EJIKEME: Well Mark it’s quite interesting. Actually if I start by just talking about where we are in terms of equity markets this year, then we’ll go into the cycle stuff, because I think it’s quite key to acknowledge how far markets have come. I mean if you look around the world most markets are up, equity markets are up between 15% and even as much as 25-30% if you go across to US equities. Now in a normal environment that for me would be an environment where growth must be accelerating and the world must look pretty good. But actually I still think we have two or three broad-based cycles. And so when I start to talk about where are we in a cycle, I always talk about the long term, the short term and the medium term, or what I call the cyclical cycle. And the one that’s in play, and it’s probably been the most powerful this year, is the longer-term cycle, which is unfortunately this world where there’s not enough growth, there’s not enough inflation, so investors are constantly being forced to buy the type of assets that do very well when growth is scarce.

And so these wonderful equity markets we’re experiencing this year are really more of a function of there being lots of liquidity around, and not enough places to put that money, so people are being forced into those structural or longer-term themes. I guess the biggest question and the one that I think is going to drive most of the rotations that we’ll see through from the fund management community going forward is really what happens with the medium term, or what I call the cycle, the cyclical cycle, and that tends to be what causes most of the debates amongst us on the investment side.

Now the challenge, and to answer your question more specifically about where the lead investors are lagging, is I tend to focus on those, because when they inflect that tends to be very good for equities. It tends to be very good for risky parts of the equity market. But today there is this kind of trade-off between those who look at lagging data and those who look at some of those forward looking indicators. The lagging data such as EPS growth, or GDP numbers, continue to deteriorate. But some of these leading indicators are giving you signals that six to nine months down the road maybe we’ll see an inflection in some of the lagging data. And that I think is the problem we’re seeing with equities today is we’re stuck in that gap, which is the data behind us isn’t good, but everyone’s looking forward and hoping that the data starts to improve.

PRESENTER: But which bit of the equity markets do you want to be in? Because as you said if bits of it have gone up 30%, what’s an inflection point going to do for you? It’s not going to go up another 20% or 30% is it?

OBE EJIKEME: Well yes and that’s the tricky one. And in fact it’s not just that they’ve gone up 30%; it’s actually that parts of the market that are geared towards those longer-term themes have now become phenomenally expensive. In the same way that people were arguing that maybe bonds might be expensive, there are stocks in the equity market that also are trading on valuations that we haven’t seen for quite some time. And at the opposite end of the scale those who are really geared into a macro recovery or an improving world, and we’ll talk a little bit about what type of styles and sectors they are later, but those type of stocks are trading on much lower valuations, and haven’t gone up as much as the longer-term thematics. So this is why for me the cycle is so important because we’ve got these trade-offs. Do you continue to buy into the long-term trend or do you look for opportunities in the cyclical parts of the market that haven’t really participated in the upside?

PRESENTER: And how are you playing that dilemma?

OBE EJIKEME: Well I think as a house we are still relentlessly focused on the long term. But also I mean we’ve already experienced in the last two or three weeks what can happen when we see these sort of snapbacks, when investors start to say well wait there, what if there isn’t going to be a global recession, what happens to certain stocks? Are we positioning correctly? So whilst we have that relentless focus on buying long-term assets that we think will do well in any environment, we also are quite cognisant of the opportunities that exist through different forms of asset allocation in areas of the market which are more geared to what I call a cyclical recovery.

PRESENTER: But are you worried that if you buy a great asset at the wrong price, it’s going to be a bad investment, even in the very long term?

OBE EJIKEME: Oh for sure. I mean there’s that old adage or old saying that good companies doesn’t always equal good prices, so you always have to make sure you’re paying the right price for that type of company. And also we have to be cognisant of the fact that there are some parts of these companies that, where their equities have gone up specifically because of macro risks. And that’s always a challenge for us as an equity investor to try and separate this, how much of this is fundamentally driven, how much of it is macro drive, and so that’s why often you’ll find us actually reducing positions in stocks which have gone up a lot, where we actually think OK long term it’s fine but the stock market reaction’s been a bit too much to the upside.

PRESENTER: I guess if we’re looking at what happens to GDP growth, crucial is going to be what central banks are up to. What sort of a game do you think they’re playing at the moment?

OBE EJIKEME: Well thankfully this year it feels like they’ve finally come back to their senses. And I’m not trying to criticise central banks, but I think what typically tends to happen is because they’re relentlessly focused on data points, which tend to confirm things that the equity market always knows, there is a risk that they’re late to the party. And we saw that last year when the Federal Reserve was raising interest rates whilst there were significant signs that forward expectations of growth were already coming down. And so this year we’ve seen a significant shift. If you look at policy around the world, central banks everywhere have started to cut interest rates. And so that is a very good countercyclical measure that we look for when we’re at these sort of low points of the cycle. For me it’s pretty good news, but we have to wait to see that the translation of those interest rate cuts into fundamental data.

PRESENTER: Now, with all this talk about looking at the cycle and what’s going on, but when the two most powerful countries in the world, the States and China for example, get themselves involved in at the very least a trade spat, is there a danger that the models go out of the window? There are more powerful forces going on, more important things than just what happens to GDP growth.

OBE EJIKEME: Oh for sure. So if I look back, the one thing I generally tend to talk the least about is what I call the banana skin. So if you put it in terms of the term horizons, you have the long term, the medium term, and I have this short term what I call banana skin stuff. I mean that really has been the story of the year. We’ve had, in fact this summer was the third episode where we’ve seen sentiment shot to pieces essentially, because of a tweet or some sort of action between the US and China. And that’s very unusual. These tend to happen once every four years. So when you’re at a cyclical low of the cycle, where people aren’t really that confident on the growth outlook, the risks of these short-term events stopping you from seeing what I call escaped velocity or recovery in the cycle are quite significant, and that really has been the story of 2019, is that every time we’ve felt like we’ve just been managing to get out of these holes, all of a sudden we have an incident which brings down sentiment. The hope is that the growth cycle will start to accelerate, so the impact of those short-term events becomes less. And I think that’s what we’re probably going to see as we go further through the year into 2020.

PRESENTER: So, in summary, what’s your outlook for the next three to six months for the economy and for markets?

OBE EJIKEME: Yes, I think the outlook is relatively positive. I mean I think the starting point again, if we’re at the period where we were entering 2018, where expectations were really high and that there was only really a downside risk to growth expectations then I would be quite concerned, especially with a market that’s already gone up so much. But I think the way the market’s gone up this year leaves us some room that if we get some good news and if the data starts to improve, which you haven’t really seen the real, the big signs of, then you have a much more sustainable recovery. And so I would say for the next three to six months it’s continuing to focus on the long-term thematics of the portfolio, which is owning these good companies, but that is becoming increasingly risky given the risk of a short-term recovery as central banks start to respond to the weakness in growth.