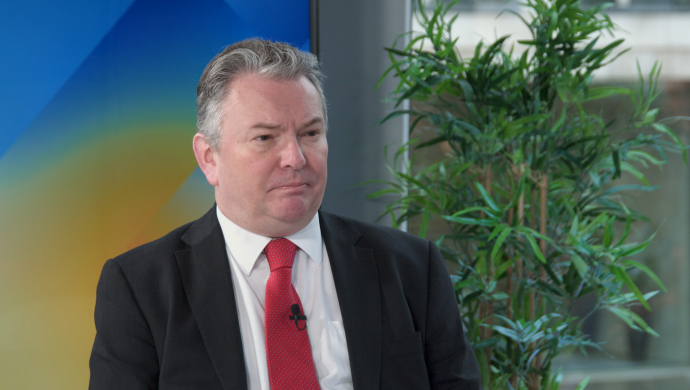 WATCH LATER
Tim Middleton, Director of Policy and External Affairs, Pensions Management Institute takes a look at the key issues for pensions going into 2020, such as when we will see the next pensions bill, as well as developments for auto-enrolment & trustees.

Mark Colegate: With his outlook for 2020. I'm joined now by Tim Middleton. He's director of policy and external affairs at the PMI, well Tim we’ve just had the election. What we expect in the next pensions bill?
Tim Middleton: Well, we'd expect the next pensions bill to be very much like the old pensions bill. Exactly when it's likely to appear is very difficult to say. The government has of course, got a number of things that he wants to get through in the last Parliament. Of course, there was so much business that couldn't get through because of the Brexit logjam. So, it's difficult to say exactly when a new pensions bill appears. But on the basis that there was nothing in there that was really politically contentious, we would expect it to be very similar in character to the old Bill. One area that might need to be re-considered is clause 107 which has caused a degree of disquiet within the pension’s community. This deals with the original idea about reckless endangerment of a pension scheme and measures that should be taken against it. And there are those who feel that the current clause, as drafted could catch anybody who provides consultancy services to pension schemes. And on the basis that this isn't the original policy intention, it may be that this is a requirement to have that be amended in some way.
Mark Colegate: What about DB Consolidation?
Tim Middleton: Well DB consolidation was never part of the last bill. There’s been a degree of discussion as to exactly how well funded DB consolidators should be. On the one hand, there are those who believe that consolidating by virtue of the kind of role that it has should be funded rather more along the lines of an insurance company, and others who would provide a counter argument saying that if it's going to be funded like an insurance company, it might just as well be an insurance company doing buyout rather than an occupational pension scheme put together for the purposes of consolidation. So that's something which has to be resolved. That said, it is generally accepted that the first DB Consolidators should be in a position to be up and running formally within the first quarter of 2020. We would expect to see the first transactions taking place within the next month or so.
Mark Colegate: And do you think we can see any developments? Or we're likely to see any developments when it comes to auto enrolment?
Tim Middleton: Auto enrolment is something which has been a subject of quite a lot of discussion. Of course, we had the review, which was looking at the longer-term changes and there has been a lot of pressure to reform auto enrolment, particularly in view of the fact that we are now in the era of the gig economy. This means that there are a number of people in self-employment who as a result of the way auto enrolment works have been left out of this whole new arrangement for including people within the pension savings. So, there could be some changes to see that changed. Other things which we know will change at some point in the near future will see the end of the lower threshold, which means that more of an individual’s’ earnings will be incorporated in the calculation of contributions.
Mark Colegate: And anything that trustees can expect?
Tim Middleton: Two streams to this. First, we will now see in 2020 the formal accreditation standards for professional trustees. This was something that was originally due to take place during the summer of 2019. Unfortunately, it didn't happen then, but that's now going to happen and we will now see a formal procedure put in place, which allows those working in the professional trusteeship sector to seek formal accreditation, which will be a real leap forward. Other thing to look forward to is the TPR response to the consultation exercise it ran during the summer of 2019 and we will be seeing more things about improving the standards of governance generally. So, there are a number of options which TPR has been considering. One is the introduction of a CPD scheme for trustees. Now, this is something that we've had at PMI within our own trustee group on a voluntary basis for a while. It's something which works extremely well and did something which would allow any trustee board to keep a really close eye on what kind of trustee training is going on, on an ongoing basis. Other things that TPR is seriously considering, as mentioned in the consultation exercise, is ultimately to have a formal requirement to have a professional trustee appointed to every trustee board. Whereas that might not be a realistic expectation over the near future. It's a very real possibility that the regulator will want to revisit this in the future.
Mark Colegate: Well there’s quite a lot on the pension’s agenda. I hesitate to ask. But is there anything else that you're expecting in 2020?
Tim Middleton: Well, something that the industry is greatly looking forward to Is the final resolution to the GMP equalization issue, bearing in mind that this year will see the final 30th anniversary of the original Barber judgment, finding some legally binding mechanism to allow equalization of GMPs will be something that will be extremely beneficial for the industry, particularly as this, and it is expected to be quite a great deal of buyout activity towards the end of the year and that will be something which will be much easier if the uncertainties of GMPs have finally resolved.
Mark Colegate: We have to leave it there. Tim Middleton. Thank you very much.
Tim Middleton: Thank you.