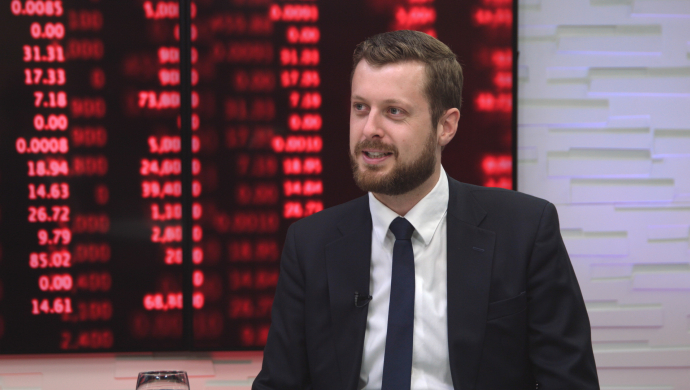 WATCH LATER
As we enter the summer lull, join Phil Butler, Multi-Asset Portfolio Manager at T&IO, for a reflection on market performance across 2019 so far. In this video, he also looks at the Fed’s rate cuts, notable investment activity across Q2 and also outlines if there is cause for concern when it comes to the mixed macro picture that is appearing.

PRESENTER: It’s the holiday season, but how hard are the global economy and markets working? Well, to discuss that I’m joined now by Phil Butler. He’s Multi- Asset Portfolio Manager at the M&G Prudential Treasury and Investment Office. Well, Phil, let’s start with markets, where are we so far in 2019?

PHIL BUTLER: Hi Mark. Yes, 2019 has been a bit of a rollercoaster for markets. But if we try and take a step back as to what’s actually happened. So US equity markets up around 15%; European markets up maybe near 9%; Asian markets flat to down. Now, if we look at the government bond market, they’ve had a great rally. So treasuries have moved from 2.7% down to about 1.6%. We’ve had UK gilts down now at near 0.5%. US German bunds even are now negative 0.6%. Moving to the corporate market spreads have also tightened on the back of largely company strong robust earnings. We’ve also seen property largely flat. And alternative asset exposure has been roughly in between property and equity. What this has meant for a multi-asset investor is that your returns that you’ve seen have been very good over the 2019 period.

PHIL BUTLER: I think it’s tricky. I think the worries that you have in each are slightly different. I think the bond markets are telling you about where they expect the economic cycle to go and fears over trade wars and the worries about how that will affect economic growth. Equity markets are holding onto the fundamentals of broad corporates, which is earnings growth is still showing us that there’s yield to be had, so slightly different arguments, but causing strong returns.

PRESENTER: So it’s not all about an optimistic outlook.

PHIL BUTLER: No, indeed, I think when you look at the background what we have is a very volatile period. So, me and my colleagues have been saying for a long time now that we expect the volatility to stay. Now if we think about the reasons why that might be. The looming one that everyone sees is US/China trade wars, understandably. The most recent update was Trump decided that he no longer had any patience and he was going to add new tariffs in September on all goods. China retaliated with a combination of banning Chinese companies from buying US agriculture goods, but also threatening not intervening in the FX market like they previously had. Now, if you combine this with Italian politics shambles that are going on. You’ve got populism in Argentina. You’ve got Japan South Korea having a bit of a tit for tat, and you’ve got India/Pakistan. All these things can mount up and you can see naturally where that investor fear comes from.

PRESENTER: Well from what you’ve said the performance numbers look pretty good over 2019, the calendar year so far, but what do they look like over a full 12-month period?

PHIL BUTLER: Great question, I think a lot less rosy. I mean those risks we’ve mentioned have caused investors to really have periods of panic or distress. We saw in Q4 2018, we say it again in May, and actually we’ve seen it for a short period in August already. Now what that’s meant is actually US equities are mildly positive over that 12-month period. European equity markets are actually down roughly 5%, and Asian markets are actually down double digit, whilst the government bond yields and wider corporate bond space have had probably a better run in that 12-month period over and above what we’ve seen in 2019. What that really means for a multi-asset investor is actually your returns have been stressed over the 12-month period, whilst they look rosy in the 2019 period. So I think what we’ve got to be careful of is 2019 is great, but we’re expecting that volatility, and how can we continue to help our investors make the most of that?

PRESENTER: You were mentioning how much different global markets are up or down, are these in sterling terms or local currency terms?

PHIL BUTLER: So everything I referred to so far has always been in local currency terms. Now you’re on the point where sterling’s depreciated so much, being a sterling investor and having all these assets overseas, actually we’ve benefited from that sterling depreciation. So actually for a sterling investor they’ve done actually quite well out of this turmoil.

PRESENTER: Now, we talked about markets, a little bit about politics, what about the state of the economy, because it’s a pretty mixed picture out there isn’t it?

PHIL BUTLER: You’re great. I mean we’ve had patchy data. We’ve got worries over the length of the economic cycle. So it’s good to go back to actually what have we seen? I think in the US we’ve got corporates, Q2 earnings were strong. We’ve got low inflation in the US and also globally; US has also got a very good labour market at present. In Europe it’s a little less clear. I think they’ve been largely affected by the stress on global trade and manufacturing. You look at either steel and engineering, look at their autos, so they’ve struggled a little bit in this wider market, Germany in particular, but it’s largely the wider European. In China there has been some stimulus, fiscal stimulus at the end of 2018 into 2019, that has helped try and turn some of those numbers, and we’re starting to see that come through in the data. The data on a broad picture is 50/50. In the UK I think business investment is at a sustained low, obvious reason why that is, and I think that’s starting to come through in some of the economic numbers that we’re starting to see.

PRESENTER: And with the Fed cutting rates recently, is monetary policy supportive globally now, or purely in the US?

PHIL BUTLER: I think globally. I think the short answer to that is in 2019 alone we’ve seen 22 different rate cuts across 16 central banks. So globally that’s roughly, it’s over 1,000 basis points’ worth of monetary easing within the system. I think to name the US, India, New Zealand, just as the most recent ones to have looked to cut that monetary policy rate. If you then add into that the fact that the ECB and the Bank of Japan have negative policy rates, that also shows further stimulative monetary policy. The question I have, and central banks have had with the inflation benign background, the ability to do this, it’s actually can monetary policy continue to be supported? Because the self-created headwinds that we have globally now with just take trade wars as an example, it’s not clear that monetary policy can overcome the negating of a fiscal policy stimulus that we have yet to see. Now, China could do more. It’s tentatively doing a bit, and there’s been reports that Germany’s looking to do some, but it’s not obvious that there’s that wave of fiscal stimulus to come through in the market.

PRESENTER: So finally what notable investment activity have you had on the portfolios over the last quarter?

PHIL BUTLER: I think we can broadly split this into two different areas, the first being our strategic asset allocation. So this is our long-term benchmark views of five/10-year view horizon that we have. In this space we’ve done a reduction in global equities. Now I think over that medium term, given that we think that we’re towards the end of a business cycle, whilst valuations are not extremely expensive, we do feel that there’s a need to cut some of that back. So we’ve reduced that global equity weight marginally. In the UK space we’ve added smaller companies as a bespoke part of the benchmark. Again that’s to try and add some diversity, but also to unlock some of the value that we believe in that particular part of the market. In addition to that we’ve also added US treasuries. Now when we added this to the portfolio US treasuries were at a much higher absolute yield, so from a portfolio context that made a lot of sense. Clearly they’ve moved relatively dramatically from there, but it’s important to have that diversification within a fixed income space where corporate spreads are relatively tight at the moment. The second area is around our alternative assets exposure.

Now Prudential philosophy has always been about diversification and trying to unlock assets that have either a yield premium, or a correlation is not traditionally correlated with those assets that we normally invest in. Now what we’ve done here is try and combine that with themes that we see structurally changing within the global market. So one of these is around EM infrastructure and renewable energy. We believe that the capturing of renewable energy and then the distribution of that is important, and by focusing on emerging markets, where both the profile of the weather, and also the continent is important. The other area is around a combination of renewables again, but with the technology. So battery technology has improved so much recently that the ability to harness the renewable energy, store it, because that’s where the battery technology comes in, and then distribute it. Now we’ve made some allocations to those sort of investments in the last three or four months, and we do believe that they can be beneficial to the portfolio in the longer term.

PRESENTER: Thank you for watching. Please do keep an eye out for further multi asset updates here on asset.tv; from all of us until next time goodbye for now.