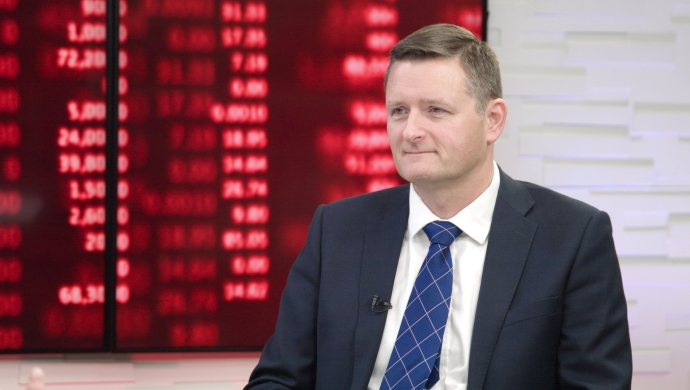 WATCH LATER
Barry Widdows, Head of Multi-Asset Portfolio Management at Prudential, discusses the performance of markets in the last few months, good news from his portfolio in Q4, changes to investor sentiment at the start of 2019 and the current positioning of the portfolios.

BARRY WIDDOWS: Yes well it’s been a pretty wild ride on markets since we last spoke. Because you recall back in October we had a pretty weak month for equities, one of the weakest months for some time, and that actually got worse in December. So we really ended the year on a pretty bad note for risk assets such as equities and corporate bonds. In the US, the S&P 500 index was down around 9% in December alone. And in Europe the Euro Stoxx 50 index down around 10%, also, and in FTSE in the UK market, down nearly 4% so some pretty weak returns.

In fixed income land, it was really a tale of two stories. So we had the sovereign bond markets were actually doing pretty well. And that was really I think because he had some safe haven flows and money flowing into government bonds during this period of weakness in other assets. The gilt yield fell around 50 basis points between the middle of October and the end of the year. And we had a similar fall in US treasury yields and even the bund in Europe down around 30 basis points over the period.

So, government bonds doing pretty well; the other side of that though in terms of credit markets, credit spreads actually widen significantly. And that’s consistent with what we’re seeing in equity markets. So I think the credit markets were really starting to price in some fears about the macroeconomic weakening and potential for credit default, so overall corporate bonds had a pretty tough time too.

BARRY WIDDOWS: Yes I think there’s a number of factors that were at play. So if we look back at 2018 and certainly the first nine months or so, we really had this backdrop of rising yields. And that was putting some pressure on the valuation of other assets essentially. We coupled that with I guess some increasing concern of where are we at the point of the economic cycle, this cycle’s getting a bit long in the tooth, and there were concerns that we were nearer the end and recession was potentially imminent and that was exacerbated by some of the macroeconomic data that we’re seeing which was indicating a bit more weakness around the globe.

I think really you take that macro side of things and then you throw in some political events such as Brexit, trade wars, Italian politics and even the shutdown of the US government, and you’ve got a number of I guess reasons for investors to be a little fearful about holding risk assets. The final cherry on the top I suppose was really that we’re in December, the holiday month, so liquidity was pretty light in markets. And you really had a setup which any asset moves could be exacerbated by that. So we saw some pretty dramatic moves.

I think what we saw was really a pretty rapid change in investors’ beliefs. You know, was it an overreaction? I think what you’ve got to do is look at what the market was pricing at that point and really at the lows the market was pricing on a pretty full recession. In our view at that point, you know, we hadn’t seen a really severe or sort of prolonged deterioration in macroeconomic data. So in our view, you know, perhaps the reaction in investors’ beliefs was a bit of overreaction potentially so that could present a potential market opportunity to buy.

PRESENTER: OK. So you’ve talked about the challenges in Q4 but any good news stories in your portfolio?

BARRY WIDDOWS: Absolutely. So Q4 was certainly a period where you needed some diversification across your asset classes. And 2018 as a whole was a very difficult year for multi-asset investors. There were very few asset classes which produced a positive return. When we look across our portfolio, we were very pleased I’d say with how it held up during the period and the year as a whole. And really I think that was down to having some fairly significant exposures into diversifying assets such as real estate and alternatives. In our real estate portfolio, we also try and diversify across geography. And that was very helpful during the period.

So across all regions actually we produced positive returns in the quarter and the overseas assets did particularly well because we also saw some sterling depreciation which helped boost those returns in sterling terms. And then in alternatives we have a number of return streams that essentially uncorrelated with traditional listed markets, whether it be infrastructure, private equity and other strategies. Again across that complex in Q4 we produced positive returns, which was helpful to the overall portfolio. And then finally another bright area was Asian fixed income. We have a specialist manager there and we’re investing in both dollar and local currency bonds and that part of the portfolio produced some great returns. So, overall, you know, you add those pieces together and they really help sort of offset some of the weakness that we’re seeing across the traditional equity markets.

PRESENTER: So then how has 2019 started and have you seen any changes to investor sentiment?

BARRY WIDDOWS: 2019, we’ve certainly seen quite a rebound in asset terms. We’ve seen the S&P market in the US say up around 15% from its lows, so quite a dramatic rebound. I think it’s not necessarily investor sentiment that’s changed. I’d perhaps say it’s more central bank sentiment that’s helping the market to recover. And if we look at what’s happening to yield there, in the last three to six months we’ve seen quite a dramatic shift in the expectations for monetary policy. If you look at the US short end of the curve, we’ve seen a fall of about 60 basis points. And only as a matter of six to 12 months ago that market was pricing two or three hikes in 2019 and now it’s actually pricing a chance of moderate rate cuts, so really traumatic shift in sentiment. And we’ve seen that across other markets too around the globe. And I think this is all about central banks really starting to respond to some of the weakening macroeconomic data that we’ve seen and starting to reassure the market that they’ll pause in terms of hiking action or actually become accommodative and help markets essentially try and stave off a recession in terms of some of these weakening markets.

So I think that’s really helpful. We’ve seen the Federal Reserve come out and certainly indicate again they’re going to very dated appendant in terms of their future interest rate path. We’ve seen the Central Bank in China again continue with policy action to be helpful to liquidity conditions in China. And we’ve also had other central banks joining the club recently. So in India we’ve seen cutting rates and last week there was a Bank of Australia, again coming out and shifting its styles to become more accommodative. So we’ve got a real theme of central bank supportiveness I think coming into markets again. And that’s helping investors have the confidence to return and buy risky assets this year. I guess for a couple of reasons, first because that could prolong the cycle and help risk assets perform, and also because just on a relative valuation basis, yields have now fallen across a number of these markets and that just makes risky assets look more attractive on relative terms.

PRESENTER: What data will you be most closely analysing over the coming months?

BARRY WIDDOWS: I think we’ll firstly be focusing on that theme I’ve just mentioned, so continuing to watch the macroeconomic data as it comes out. Looking for indications of growth weakening and of potential concerns in earnings or credit concerns, so really watching those key macro releases carefully; also on the second aspect of that, so watching how central banks are going to respond to that. It’s certainly a theme that the markets are going to focus on that in the short term and that could be a bigger effect than the actual underlying macroeconomic data.

So we’ll be looking at the statements to see any change in the willingness or ability of central banks to, help defend these sort of markets and sort of help avoid a sudden end to the cycle. And finally I suppose we’d also continue to focus on some of the micro issues such as earnings. Watching the earnings season careful I think it gives us indication on how corporates are being affected by some of these issues in the world such as trade wars and Brexit, you know, how’s that feeding into actual earnings and spending decisions. So we’ll be continuing to watch the end of the earning season in the US carefully as well as some of the key European corporates who are reporting over the next couple of weeks.

PRESENTER: So finally how are your portfolios positioned currently?

BARRY WIDDOWS: So we took advantage at the end of the year, some of the weakness we’re seeing in equity markets. As I say we view that as a slight overreaction. And we took advantage to move our portfolio slightly longer equities at that point. So we continue to believe that equities are attractive relative to fixed income. If you look at the earnings yields across the globe, they do look pretty attractive now. If you take something like the MSCI All World index, you know, this year you’ve had earnings yields of 7-7½%; and if you look at where it is compared to the start of 2018 that’s up about 1½%. So while you’ve got a lot of perhaps more risks in the world now, more concerns to worry about, as an investor holding a diversified basket of global equities, you’re actually getting compensated by an extra 1½% a year to take on that risk. And that feels OK.

In terms of region, we prefer the non-US markets, so global equities ex-US, particularly like Japan. Some of the emerging market assets are looking quite attractive now and particularly with the Fed starting to move to sort of more of an easing tone, emerging market assets could perform well. UK equities actually look pretty good value, but I think it’s quite hard to take that call right now because the assessment of what the right Brexit risk premium is, it’s quite difficult to make. And finally I’d just say, you know, with the potential short-term volatility, we’re always looking for opportunities to take advantage of that and I’m sure we’ll see lots of that going forward.