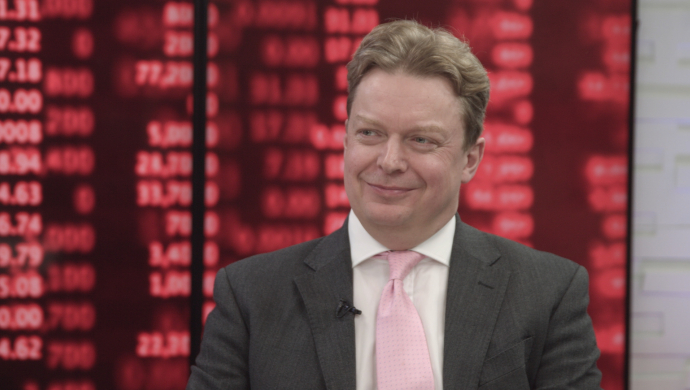 WATCH LATER
Charles Griffith, Senior Portfolio Manager at Prudential discusses market performance in the first quarter of 2019, the progression of the US/China trade dispute and the near-term risks he sees in markets.

PRESENTER: For the latest update from the Prudential Portfolio Management Group, I’m joined by Senior Portfolio Manager, Charles Griffith. So Charles, since you were last here, how have markets been performing?

CHARLES GRIFFITH: Well, it’s been a really good Q1 actually in terms of performance. So equity markets across different regions have produced double digit returns this year. And some have actually reached all-time highs, such as the S&P 500. So it’s obviously been a very big turnaround from what we saw in Q4, where markets really fell significantly across all different asset classes. What we’ve seen really in Q4 is a great fear of recession risk come into markets. And also during Q4 we saw basically markets think that central banks would continue to raise interest rates, despite macro data getting much weaker.

What we’ve seen this year is actually a complete turnaround in central bank stance. So they’ve gone from a position of raising rates to one where they’re very much on pause. And as an example US 10-year treasury yields were at 3.25% in November 2018 and they’ve fallen back to around 2½% today, which is a level not seen since January last year. So there’s been a very significant change in terms of market expectations of rate activity by central banks, and that’s really driven markets this year and driven a very big turnaround.

PRESENTER: And how would you say the macro data releases have supported the rally we saw in Q1?

CHARLES GRIFFITH: Yes, that’s a really interesting question, because we saw macro data weaken during the second half of last year. So it’s still in positive territory, but it’s come off quite a bit. And this year we haven’t really seen any change. So why have markets rallied so much without a change? Well, again, it’s in expansionary territory still, albeit it’s softened, inflation data has remained very contained, and we now see central banks taking an accommodative stance, and so all of those things together have really produced a very good market reaction in Q1, despite the macro position not really changing much.

PRESENTER: Well the US/China trade disputes have been dominating headlines, but how would you say they’re progressing now?

CHARLES GRIFFITH: So those talks, talks between the US and China delegates on trade and tariffs have been ongoing for several months now. What we’ve seen over those months is very positive rhetoric from both the US side of the table and the Chinese side of the table. But in reality we’ve seen very little detail. It’s just been positive sort of aggregate commentary. We’re approaching a final meeting on the subject, and as we’re approaching that meeting uncertainty is building, and it’s having the most pronounced effect on Chinese assets and assets that have a strong tie to the Chinese economy. It’s very difficult to predict how those talks about going to go.

We think there are probably three different broad outcomes that could come out of those: firstly a positive resolution; secondly the timeframe just gets extended, so the talks will continue for longer; and thirdly a complete breakdown of the talks. We don’t, it’s obviously very difficult to predict the outcome. It’s possible, but we think that all sides to this debate really don’t want a complete breakdown of the talks. So we think it’s unlikely but it is possible. We’re watching the situation very closely.

PRESENTER: And has your strategic view on markets changed recently?

CHARLES GRIFFITH: Yes, that’s an interesting question. So our tactical position is that the environment at the moment is quite supportive for risk assets. But strategically we’ve taken a moderate step back from risk. And that’s for several reasons. Firstly, we think that central banks potentially over the medium term could change their stance, either as a result of inflation coming back online, or because of financial imbalances building. The second thing is that we think return expectations are probably a little bit lower for us over the more medium term. And the third thing is of course that we continue to see business cycles mature over time. And those three things really moderate our strategic positioning.

Another important point to mention is really that strategically we continue to look for diversification opportunities within our portfolios. So that could be new regional exposures, new asset class exposures, and we’re continuing to look for those over time and add those to the portfolio to give it some benefits. On a more micro level, we still like emerging market assets. We think there are structural factors that are very positive for those markets. And we think relative value is good compared to DM markets. And finally alternatives exposures, we still see those as very beneficial in a portfolio context and provide very orthogonal exposures for the portfolios.

PRESENTER: So, finally, what would you say are the near term risks in markets?

CHARLES GRIFFITH: So again we think the background is supportive for risk assets, but there are some very real risks out there. So we’ve mentioned China, very difficult to predict. That could upset markets if it’s an unfavourable outcome. And on the data side we think again the environment at the moment is supportive, but much weaker data, we could see a resurgence of growth scares coming that, and that could hurt risky assets. Secondly, much stronger data could make market participants think that the central banks would start raising rates again and really do another U-turn, and that could dent sentiment again. So we’re watching things extremely carefully.

CHARLES GRIFFITH: Thank you very much.