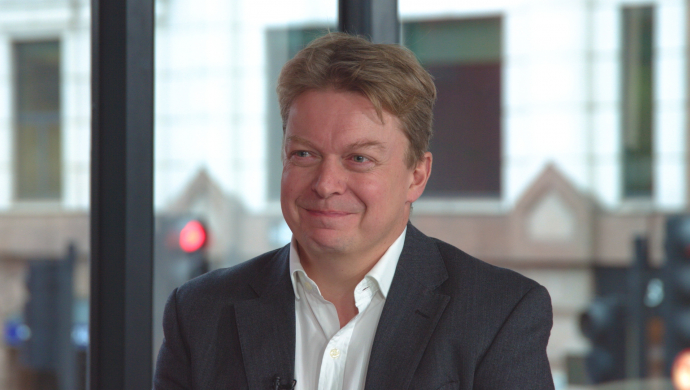 WATCH LATER
Charles Griffith discusses the risks he sees in the market, how the ongoing trade war is affecting the market & how equity markets have been performing.

PRESENTER: For the latest update on what’s happening in the markets, I’m joined today by Charles Griffith, Head of Multi-Asset Portfolio Management at the M&G Investment office. Thank you very much for coming today.

CHARLES GRIFFITH: Not at all.

PRESENTER: Well, first of all, how have equity markets been performing recently?

CHARLES GRIFFITH: Yes so markets have taken a bit of a breather in Q3 2019. Although the S&P 500 Index is up at just over a 1% in the quarter, broad DM equity markets are actually down about ½%. They’re still up 17½% year to date though so it’s still a good story, but it is a bit of a pause for breath. And then if you look at credit markets during the quarter, it’s a little bit more mixed. So European credit spreads outperform US credit spreads, and that’s really, we think about the ECP reinstituting its QE programme and continuing once again to buy credit bonds in the market. And then finally turning to government bonds, the rally has really continued into Q3. So, core government bond yields have fallen between 20 and 30 basis points during the quarter, and taking an example of the US 10-year yield, that’s down about 90 basis points year to date, to finish the quarter about 1.75%, so there’s been an extraordinary rally this year that’s been seen really across all asset classes.

PRESENTER: And have macro data releases supported that rally?

CHARLES GRIFFITH: Well, not really, that’s quite an interesting question. So what we’ve seen throughout 2019 is macro softness, and that’s a theme that’s continued into Q3, so financial conditions are accommodative right now. It remains to be seen whether that pushes through into macro data and creates some stimulus. What we have seen is manufacturing PMIs basically soften throughout the year. They’re currently below 50, which signals economic contraction. We are seeing some tentative signs that that’s flattening off but we’re not getting too excited yet. And then finally inflation data continues to be extremely low and stubbornly low, and obviously that’s a focus of central banks. What we’re seeing is economists actually question Phillips curve relationships. The labour market in the US is very strong but inflation is still very low so they’re questioning whether technological advances and changes to the workforce demographics are having a structural effect on inflation levels. But the low levels of inflation have actually let central banks be more accommodative during the year.

PRESENTER: Well, you mentioned central banks, have they continued to be active?

CHARLES GRIFFITH: Yes they have. I mean if you rewind to Q4 2018, it was really the end of a hiking cycle, the end of a normalisation cycle. So taking the US Federal Reserve as an example, they’ve been raising rates from the end of 2015 to the end of 2018. And what we saw this year is really an about turn. So the Federal Reserve started to talk about changing direction, and then actually since July this year, we’ve actually seen three cuts by the Federal Reserve. Other global banks have also been active of late. And that includes the ECB who actually cut the deposit rate in Q3 this year and also reinstituted the QE that I’ve mentioned before. So central banks have been very active this year and it’s really, we think, the largest driver of the positive move in markets that we’ve seen.

PRESENTER: And what are the latest developments in this ongoing US/China trade dispute?

CHARLES GRIFFITH: Yes so obviously that’s a dispute that’s, and a discussion that’s been going on for quite some time now as you point out. As things stand right now, the market is building in some positive expectations for a positive outcome to those negotiations; probably before the end of the year. We think the positive expectations are probably based, baked it into market prices. So that presents some risks. It’s very difficult to have an insight into the outcome of those talks being political in nature. A complete breakdown of the talks we think would cause sentiment to suffer and potentially the markets to fall. On the other hand if the talks were extended and the deadlines are pushed out in time, markets may look at that more favourably. So we’re watching it very carefully right now.

PRESENTER: And what are the other risks in the markets that you’re watching?

CHARLES GRIFFITH: Yes well I think the other biggest risk for us and the thing we’re watching very carefully is the data. Because, as we’ve talked about, central banks have really gone on a bit of a spree of a dovish spree during 2019, and they’re hoping to stimulate both growth and inflation levels which have remained low. And I think the market is really looking for that to come through in the data over the next few months. So if that doesn’t happen and if the transfer effect doesn’t occur between dovish central bank policy and growth and inflation, markets could be disappointed once again. So everyone I think in the market is watching the data very closely and hoping that these instruments that are being used will have a positive effect.

CHARLES GRIFFITH: Thank you very much for your time.