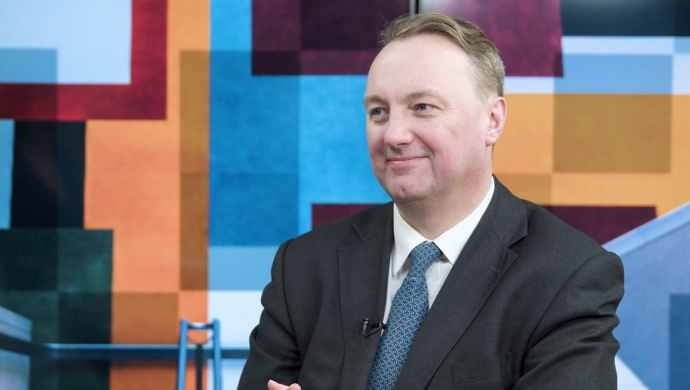 WATCH LATER
Marcus Brookes, Head of Multi-Manager, Schroders, joins Asset TV to discuss his key takeaways of 2018 and his outlook for 2019, how he chooses where to take risk, where he is seeing value and asset allocation.

If you have found this report informative and would like further information please email Asset TV at [email protected]
PRESENTER: Well joining me now is Marcus Brooks, Head of Multimanager for Schroders. So Marcus, let’s start with 2018, what were your key takeaways and what’s investment outlook for 2019?

MARCUS BROOKS: Sure well 2018 I think the polite phrase is a challenging year; 2017 saw broadly a bull market in everything. I think there was quite a lot of expectation that 2018 would see a continuation of that; particularly with the Trump tax cuts. But what we’ve really seen is the battle and the debate in the market between where we are in the cycle, which in our view is quite late, where we are in valuation terms, which we think is quite high, but actually the earnings delivery and the economic growth is still pretty good. So I think that’s what people have been debating in the market and that’s why we’ve seen a return of volatility.

PRESENTER: So what investment trends are you foreseeing for 2019 and how is this influencing your investment decisions?

MARCUS BROOKS: It may sound trite but I think the return of volatility is here to stay. You know, the easy times where we had monetary support from the Federal Reserve, the ECP, the Bank of Japan, we’ve just had some fiscal support as well, that sort of monetary accommodation and basically easier financial conditions, I think that’s now gone. We’re now in an environment where things are going to get tighter. As we get later in this economic cycle, I mean it doesn’t have to be recession straightaway in 2019. It might be 2020, even 2021. But it does mean that we’re certainly not at the beginning of this thing. So I think the trends for 2019 are the bull market and everything is inevitably going to stop and I think investors need to be a little bit more discerning. The things that have done well possibly do less well from here.

PRESENTER: Well markets have seen a succession of worries. You mentioned about the trade war. We’ve also been having the riots in Paris, everything that’s happening in Italy, specific issues in emerging markets. So how do you choose where to take risk?

MARCUS BROOKS: Well it is always a combination of a macro appreciation of where we are in the economic and market cycle, where the valuation is and where we think expectations are going to go. So favoured areas for us at the moment, Japanese equity, it’s been completely left behind. There’s been a bull market, very long and very profitable bull market in the US equity market. We think that looks like it needs to come to a close. Some of those key features of that bull market I think are now largely done; again, not necessarily a bear market. But if you’re looking for something to catch up to where the US has got to I think Japan looks pretty good.

Emerging markets from a valuation perspective look actually reasonably cheap. But then you’ve got the conflict of the trade war and the politics and what the dollars going to do so I think you need to be a little bit more circumspect of just saying valuation is the only key driver there. From a fixed income point of view, it’s interesting now that cash has a really decent yield. For instance US cash now yields more than the S&P 500. So all that money that flooded out of deposit accounts into the corporate bond market, into the equity market, it’s now got another home which is where it started off in the first place.

PRESENTER: So where are you seeing value?

MARCUS BROOKS: So one of the key investment returns I think over the last 10 years has been this investment in the growth style of investing. So, as interest rates have been kept very low, the discounted rate or the discount rate for future earnings means that those future earnings have been incredibly valuable. Now as interest rates generally come up as we talk about interest rate rises, I think that means that the growth style probably has now a headwind rather than a tailwind. And that means actually the value style actually presents pretty good value. Now the only issue with the value style in itself is it is quite cyclical. Around, there was an estimate from Citigroup saying 70% of the value index is cyclical.

So I think you’ve got to be very confident that this cycle continues for a while yet to just say all value is the right place to be. We’re just taking a view that more defensive value, a better balance sheet, the quality end of the value, or defensive value is possibly the better place for the short term. And as we get more detail about where this economy and where monetary policy’s going to go, maybe then you can go a bit more cyclical a bit later. But I would say value is value and within that defensive value is probably the more attractive area.

PRESENTER: So considering all we’ve spoken about, talk me through your asset allocation.

MARCUS BROOKS: OK. Well, we believe this economic and market cycle ends probably with a little bit more inflation I think than most people currently agree. And on that basis we probably think interest rates rise, maybe two, three, maybe even four interest rate rises out of the Federal Reserve just to get to neutral, but nothing too strenuous there. That for us means that duration is possibly not an area that you want to be in your fixed income portfolio, so government bonds may be a little bit weaker. And particularly something like the 10-year UK gilt yielding 1.2 doesn’t appear to be good value. On the corporate credit side, that has been a very popular area. And we’ve just seen a little bit of a crack in those markets for the time being so perhaps just be a bit cautious on credit. We certainly are at the moment.

So cash is king in the fixed interest and cash bucket of your portfolio. In the equity space, US equity market is great but just too expensive for our liking. Japan is underowned, cheap, got some good dynamics of world class companies so we think that could do really well. I think really though the differentiator in 2019 is going to be your alternatives exposure. And here we don’t mean the alternatives that already done well for you. Things like property, infrastructure, private equity, they’ve largely done their role I think in your portfolio. We need a diversifier now so perhaps some cautiously positioned hedge funds would be the appropriate way to go.