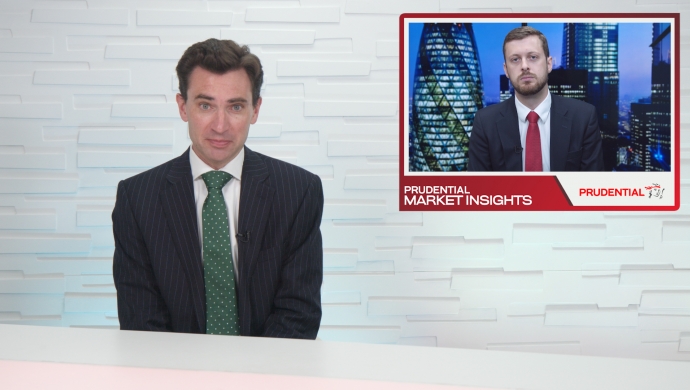 PRESENTER: For our monthly look at the global economy, I’m joined down the line now by Phil Butler, Multi-Asset Portfolio Manager at the Prudential Portfolio Management Group. Phil, the Bank of England has just raised rates, when’s the next hike likely?

PHIL BUTLER: Yes, so this week the Bank of England raised rates. It was a unanimous vote, nine members to zero to raise the bank rate to 0.75%. The market widely expected that. And I think the comments that came out from the MPC show that the economic data that was in Q1 was largely weather-based, and actually it wasn’t true of the underlying fundamentals; hence, they felt it was right to raise rates. Now, given a variety of topics, one being Brexit, I think you’ve got the angst within the Conservative Party, but also the economy isn’t running that strongly, I don’t suspect we’ll get another rate hike this year. Now the markets are currently pricing in one for 2019, one for 2020, and that’s been little change for the last six months. So I don’t think this rate hike changes that, but I don’t think we’ve got another one coming in the near future.

PRESENTER: Now, trade tensions remain, but markets have been positive over the last month. Why do you think that is?

PHIL BUTLER: Yes. So that’s been surprising, because if you read the headlines you can sometimes get maybe warped with what you’re hearing. So during July we had some really good corporate earnings from the US and from Europe. We also had survey data and some economic data showing the slowdown that was perceived during Q2 isn’t really materialising, so that, along with market behaviour of seeing less in the headlines has meant that markets have generally rallied throughout the month. Now, if you look at the actual issue, Trump’s playing his good cop/bad cop scenario, in July Europe came out and they had a really good conversation, and markets responded positively to that. Now, conversely, are China aware of Mr Trump’s tactics, and on the back of his decisions there, maybe the market started to get worried that China are trying to play his game.

PRESENTER: Now, with the recent Government White Paper out on Brexit, have your views evolved on what this means for the economy?

PHIL BUTLER: Yes, so they submitted a 104-page document that was full of lots of words, but wasn’t full of much comforting clarifying statements on what’s going to happen in Brexit. And Carney and other commentators have come out and said that if we don’t have a deal that’s a risk for the UK, and we can’t really get ourselves in that situation, and every day that goes passed we get closer to that deadline of March 2019. Now that paper went into details about what the Conservative Government want the deal to be. Now the main areas that it focused on were around, so no borders. That’s the idea of the European single market can continue in a post-Brexit era. There was also talk about customs unions, and the UK government want to use technology to basically allow frictionless trades.

Now the market is sceptical about this because it seems, nothing’s been done on this scale before, so there’s some sceptics there. And then on services, the financial services are an important part of the UK economy, and the UK largely seem like they’re cherry picking at the current deal, and I can’t imagine the European Union seeing that in a positive manner. Now, the markets have reacted negatively. So sterling has fallen to about $1.30 against dollar. Now go back earlier in the year it was at $1.43, so that’s quite a material move down. And that shows the negative sentiment that the market has on essentially the paper that’s come out. Our view is we’re very much trying to focus on the fundamentals.

So I mentioned corporate earnings earlier, we’ve had some economic growth that’s been steady if not strong, and also the monetary policy is largely still weak across the globe, so, as a business, as an investment firm, we’re trying to focus on those fundamentals rather than get pulled into this where are we going with Brexit. Concerns are clearly rising, and that’s been shown in markets, and I think businesses and marketers alike would want some clarity from the UK government on that.

PRESENTER: And finally, in light of all these headlines, how are the portfolios currently positioned?

PHIL BUTLER: Yes, so we haven’t done a huge amount in the portfolios. We remain constructive based on my previous comments around global equities and growth. So we’re overweight global equities, with a preference of UK and US at the moment, UK based on that weaker sterling. We have an underweight to fixed income, and that preference is for European investment grade over UK. And then we have a small position in Italian banks, trying to take advantage of that political risk that we see inherent in the market.

PRESENTER: We have to leave it there. Phil Butler, thank you. And PPMG will be back next month with the latest update so do keep an eye out on asset.tv for that. Thank you for watching and goodbye for now.