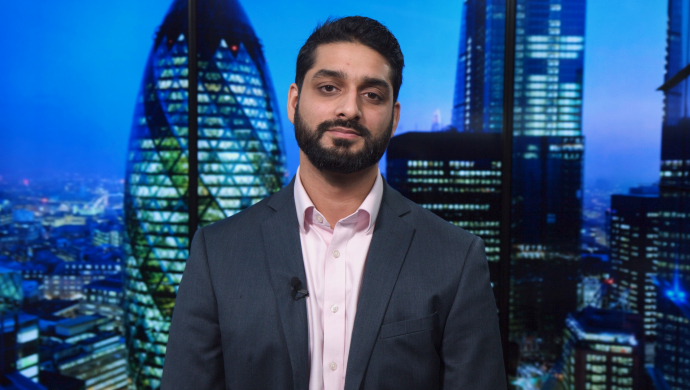 WATCH LATER
Sahil Shaikh joins us to look back on 2019, ahead to 2020 and why fiscal policy will be a key driver going forward.

now for the latest market update. I'm joined by cycle Shake, multi asset portfolio manager at Energy, Treasury and Investment Office. Thank you very much for joining us today. Now 2019 has been quite an eventful year. Can you take us through it? Thanks, Olga. In contrast, 2018 2019 as part of phenomenal year, we had a bull market. Pretty much all asset classes. They all ended up S o this really? That's a multi asset portfolios in general having an outstanding 2019 especially vessel loss compared to 2018. So despite slowing growth throughout 2019 central banks remained accommodative accommodative, which was acted as support for equities and bonds alike. Rates generally flattened across the across the globe. The U. S yield curve remained inverted for most of the year and in late late mid August we saw a pro cyclical rotation as geopolitical head winds abated. Three year has really ended on a positive after the UK general election, as well as a near resolution to the U. S China trade deal. Well, global growth has been slowing in 2019. What do we expect this year? You're right. Global growth has been slowing in 2019 especially within the manufacturing sector Globally. Competitive service is it's been a bit more pronounced with Indian markets. Our leading indicators are showing a bit of a stabilization in growth On our base cases, we see a moderate rebounding global growth coming into 2020 on one of the key things on things investors should be watching out for in 2020. Yeah, I think one of the actual key difference is if I start off with that between 2020 and 2019. Is the starting point of rate 2019? There's almost like an implicit cap on on rate. So we had the US short end of the curve getting to about 2.5% the Fed pivoting cutting rate on being a lot more supportive. This'll means there's a lot less in the tank as you would for global central banks to promote growth. Using monetary policy we've spoken about before the fiscal policy, I think is the key key driver coming into 2020. There's not much more Montreat can do on the main questions around. That is, what do the US candidates for in the primaries kind of ah proposed for us fiscal. Does Germany funny relent to the east be calls for fiscal stimulus? Do we get more details from the UK on the Conservative Party's fiscal plans? Thes could actually boost growth quite considerably, but there's a lot more to be wanted from that. Well, considering all of that, how were you positioned in? Your portfolio is going forward? Sure. So like I mentioned before, a global recession is not our base case. We do. You think there's gonna be a bounce back in global growth generally, So we are mildly pro risk coming into 2020 1 thing we struggle from struggle with on a tactical basis is just The sheer performance of equities in general has been driven by multiple expansion. That is, P ratio is getting higher. So you really need to see earnings coming through to maintain that as a support from evaluation point of view, I think it would be tough. It would be tough to justify whether any developed market equities are outright cheap, although no outright expensive. But you'd be hard, hard done by to bet against them. It's a risky game within the credit space were generally we generally think we're better rewarded for the risk taken in. Let's say high yield to better take that risk into equities on the e m space were generally constructive, especially M local debt. Again, you have a improving global growth from our base case. Looser financial conditions, easy monetary policy as well as a shift of geopolitics center around their own idiosyncratic issues to more the U. S. Iran U. S. China. Thank you very much. That was so he'll shake multi asset portfolio manager at Mong Treasury on investment office.