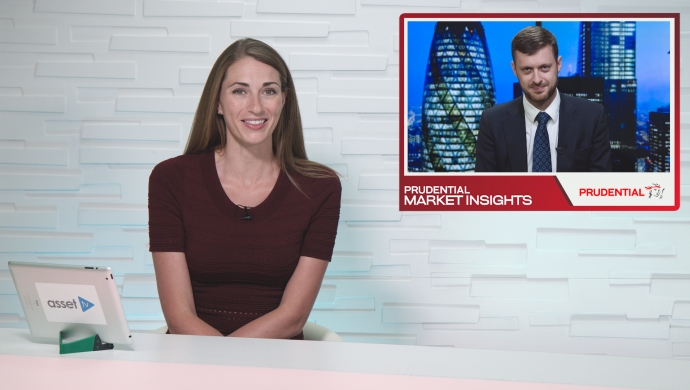 WATCH LATER
Phil Butler, Multi Asset Portfolio Manager, discusses the social impact of US trade sanctions and Italian politics, the repercussions of the US-initiated trade tariffs, and how the portfolios reflect these views.

PRESENTER: For a monthly look at the global economy, I’m joined down the line by Phil Butler, Multi-Asset Portfolio Manager at Prudential Portfolio Management Group. So, Phil, how have markets reacted to the developments around US trade sanctions and in Italian politics?

PHIL BUTLER: Thank you Jenny. I think you’re right. They’re definitely the two main areas that investors have been focusing their time and energy over the last month. I think with the US, much more of a global effect and what we’ve seen is generally global markets being weaker; in particular Asian export nations have been particularly weak and are near their 52-week lows. Conversely, US techs remain resilient and the US midcaps have actually probably been positive, as the sort of positive elements around lack of exports and imports is good for them. We’re seeing US dollar remain strong and sort of US bond yields remain sort of range bound. Now this is all based on positive economic news in that region. With Italy, the beginning of the month we had the coalition government formed.

Now, unfortunately, this didn’t sort of remove fears from investors as that sort of eurosceptic nature of this government has negative consequences potentially for the region. What we’re seeing is this worry around increased debt has caused Italian equity markets to be weaker than their neighbours in Europe and down about 8% on the month. Additionally Italian banks have been down about 13% where the worries around that government debt is much more closely focused for the Italian banks. Additionally, we’ve seen Italian bond yields remain elevated versus either German bunds, and they’re actually at record highs versus other peripheral countries. Now that’s probably to do with the fact that the markets are focusing on Italy rather than the rest of the European area. Towards the end of the month, there was a slight subdued rally as that sort of this tone was reduced by their coalition government, but it’s not back to the levels that we’ve seen of late.

PRESENTER: So what’s the medium to long-term repercussions of the US-initiated trade tariffs?

PHIL BUTLER: I think that’s a great question, Jenny, and one that’s very difficult to answer, based on the fact there’s a lack of clarity on the direction of where we’re going or the severity of where we could end up. Now, if we take the crux of the issue, this will affect supply side chains. That affects exports trade around the world. That should lower economic growth globally. Additionally, you could see effects on the sort of sharing of intellectual capital and technology. That again would reduce your sort of economic long-term potential. And then thirdly you’d see cyclical inflation as those tariffs increase the prices of goods and services.

Now that would affect export nations more than others. So you think Asia, Germany, as we discussed before, and nations that are close to the US, so think Mexico, Canada. Now whilst that all sounds very negative, and it would be in that situation, our base case is for that not to happen. We do believe that market investors are probably thinking of that worst case scenario. You know, there’s a sort of silver lining here where it tends to be when things get bad, policymakers step in and actually have the ability to overcome these issues. And ultimately Trump wants to get people to the table, so I think that actually just might be a way of getting to do that.

PRESENTER: So how do the portfolios reflect these views?

PHIL BUTLER: I think we as a group remain much more constructive on the global economy. We’ve moved from a scenario six months ago where everyone was buying into the sort of global combined recovery to a situation where markets are now trying to sort of sell into rallies as they’re nervous on it being the end of the cycle. So due to this we remain long global equities. We’ve taken out a position in Italian banks because we do believe that risk adjusted, they look good value now, and then we’re watching closely on Asian equities because they are starting to become attractive.

PRESENTER: And PPMG will be back next month for their latest update, so do keep an eye out for that on asset.tv, and thanks for watching.


This is just for UK advisers – it's not for use with clients. A fund manager’s view isn’t advice or a recommendation. This video is prepared for information and does not contain or constitute investment advice. Information provided has been obtained from sources that PPMG
believes to be reliable and accurate at the time of issue but no representation or warranty is made as to its fairness, accuracy, or completeness. The views expressed herein are subject to change without notice. No person should rely on the content or act on the basis of any matter contained in this document without obtaining specific professional advice. Neither PPMG, nor any of its associates, nor any director, or employee accepts any liability for any loss arising directly or indirectly from any use of this video. This video may not be edited or
reproduced in whole or in part or circulated without the prior consent of PPMG and may only be used or received in accordance with the applicable laws in the relevant jurisdiction. Reference to the names of each asset class/company mentioned in this communication is
merely for explaining the investment strategy, and should not be construed as investment advice or investment recommendation of those companies. The value of investments and any income from them may go down as well as up and are not guaranteed. Investors may
get back less than the original amount invested and past performance information is not a guide to future performance. By watching the video, you agree to be bound by the foregoing limitations. Prudential Portfolio Management Group Limited, is registered in England and
Wales, registered number 2448335, with Registered Office at Laurence Pountney Hill, London EC4R 0HH.