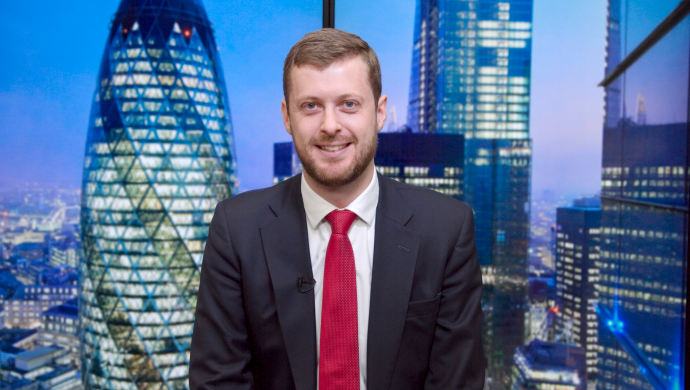 WATCH LATER
Phil Butler, Multi Asset Portfolio Manager, PPMG, discusses the increase in ten year treasury yield, the reasons behind recent global growth and where we are with trade relations and tariffs.

PRESENTER: For our monthly look at the global economy, I’m joined down the line by Phil Butler. He’s Multi-Asset Portfolio Manager at the Prudential Portfolio Management Group. Well, Phil, as expected, the Fed has raised rates for a third time this year, so what’s been the cause of the recent increase in the 10-year treasury yield?

PHIL BUTLER: Hi Mark. Yes, I think the recent increase we’ve seen in the US 10-year rate from 2.85% in the summer up to about 3.2% more recently is probably driven by two main areas. I think one is distractions from other global events and scenarios that are happening. I think the trade war scenario, it just means that the reflection back on 10 years has come more recently. On the other hand we’ve had some short-term data and news out on US inflation. That has implied that that US inflation rate might be going faster than expected, causing the Fed to need to act more quickly and to raise rates faster than current expectations. That may be leading that push that largely came from wage data and then the recent increase in oil from around $75 up to $85. So yes they’re probably the reasons.

PRESENTER: Now there’s been a lot of comment around global growth now being less synchronised, is this simply down to the strength of the US economy?

PHIL BUTLER: I think broadly it is, but there’s also a contrast that we can put there. Now the US economy is gathering momentum. It’s been benefited from the decade long monetary stimulus, the more recent fiscal stimulus, and that momentum is coming through and growth is really gathering speed. Now, in contrast, the IMF has recently downgraded the UK, the Euro area, Japan, even Argentina, Brazil, India on their future expected growth rates. Now they’ve cited things like again the trade wars, the recent increase in oil price. Brexit’s a big one for UK and Europe. And I think those factors are just stemming some of the growth expectations there. Now what this is causing is for there to be a divergence also in the way that markets are interpreting this data, causing stock market performance to differ in those two areas. So I think it’s largely two different worlds of slightly different scenarios.

PRESENTER: Now trade relations and tariffs are rarely out of the news at the moment. So can you give us an update on where we are right now?

PHIL BUTLER: Yes, definitely, we’ve had some positive news in the month. We have three areas: talk about NAFTA, China and then Iran on the end. So on NAFTA they’ve finally managed to agree, although it hasn’t gone through Congress, a new NAFTA agreement. It’s mildly improved on what was already there, and takes a loss of the stuff that the old Obama administration had done in work for the TPP. This is all positive. I think the most interesting element of this is now we’re finally seeing a Trump negotiation plan happen from start to finish. Now, if you think about his tactics he starts off very hostile with harsh words and tariffs, he then leaves it sometime, lets it all bed in, lets markets fluctuate through, and then at the end hopes that there’s going to be a good deal at the end. And now in the case of NAFTA it’s a good deal, even if it’s only mildly good.

Now, if we relate that to China, what we see here is are China going to play a different game here. Trump administration added $200bn worth of tariffs on additional Chinese goods during the month. These are things on handbags, bicycles, so these are like consumer goods. China retaliated as we expected. And then the Trump administration came back and go well we might put even more on you in the future. Now, at the moment, we’re in that wait and see phase. It sounds like Trump is trying to buy some time, get through the mid-terms. Let’s hope that the China situation ends as well as the NAFTA agreement has.

In Iran, it’s a slightly different case, where they’re not really tariffs, they’re more sanctions, but whilst it’s a smaller global player it’s having an effect on investor sentiment, and also on that oil price. So it’s having a negative effect. Let’s hope that towards the end of Q4 this year we can start getting some more positive news out of those negotiations that are happening.

PRESENTER: Phil Butler, thank you. And PPMG will be back next month with its latest update, so do keep an eye out for that on asset.tv. Thank you for watching, goodbye for now.