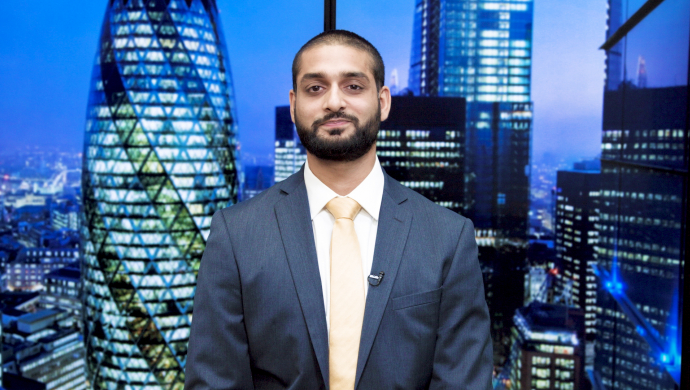 WATCH LATER
Sahil Shaikh joins us to discuss the good news amongst the bad in a slowing global economy, whether he thinks the looming global recession will be different to last time & how much impact the US/China trade war is having on the market's volatility.

Prudential PLC, Markets, Sahil Shaikh, Global Economy, Global recession, US/China trade war, GDP, Brexit, Monetary Easing, Fed
PRESENTER: With our monthly look at the global economy I’m joined now down the line by Sahil Shaikh. He is Portfolio Manager at the M&G Prudential Treasury and Investment Office. Well, Sahil, the global economy looks to be slowing right now, but what are the key data points to keep an eye on and what’s the good news?

SAHIL SHAIKH: So, in August, we’ve seen a continuation of the global growth slowdown. Geopolitical events, trade tariffs have affected business investment and sentiment in general. What we’ve seen particularly is a deterioration in PMIs globally, especially within manufacturing. Now, you can imagine trade tariffs have quite a meaningful impact on physical goods, which affect the manufacturing industry meaningfully. Economies such as Germany, which are manufacturing heavy, have been particularly impacted. So for example in Q2 2019 their GDP actually contracted and they’re not far from a technical recession. However labour markets remain robust. Unemployment levels in the US and Europe are at decade lows. So there is some positives, but some negatives as well. You can see an improvement in consumer sentiment and consumer spending, which actually is one of the reasons why service PMIs haven’t deteriorated as meaningfully or as fast as the manufacturing side.

PRESENTER: Well many people are discussing when the next global recession might be, the last one was very deep; do you think it’s going to be different this time around?

SAHIL SHAIKH: Now, this is always a hard question to answer, given the uncertainties going forward. Our base case is that we do not think there’s going to be recession in the near term, although the likelihood of a recession has increased versus our view let’s say a year ago. Now, what is different now? Household leverage is at low levels compared to history. Regulation in the banking sector has reduced the vulnerability of these institutions. In the US imbalances in the economy are few and far between. For example, debt servicing of households is particularly low versus recent history. Now in the UK there’s increased uncertainty around Brexit, although growth is slower than US it’s at a similar stage of its cycle as the US. Europe, there’s not room for monetary easing, growth is quite low, inflation is low. But one positive in my opinion is that the Fed seems to be ahead of the curve in cutting interest rates; however, this is yet to be confirmed. But definitely compared to 2007/08 we’re seeing less imbalances and excessiveness in the economy, which leads us to believe that if there is a recession it’ll be a milder recession and not as heavy as the GFC.

PRESENTER: The US/China trade talks and spat overall caused quite a lot of market volatility in August. That seems to have calmed down since then, but can you give us an update on where things stand today?

SAHIL SHAIKH: Sure. So August was a prime example of how unpredictable these trade negotiations are. The month started off with China adding tariffs to US goods in retaliation, but like you mentioned the stance has softened and improved since then. So actually the US and China have agreed to meet in early October for face-to-face trade negotiations. The last time they actually met face-to-face was in early July. Interestingly after that the US imposed tariffs on virtually all Chinese goods. Now, although I say these are unpredictable, what we try to do, especially within the many asset classes that we invest in, are to take advantage of short-term mispricing on any overreaction to any news or data. Now for example in August you saw equity markets extremely volatile, global rates plummet.

In terms of positioning we have gone underweight global rates, given how far they’ve moved in such a short amount of time. We’ve maintained our overweight in equities, although at a lower conviction compared to three or six months ago. And we have maintained a level of dry powder in the portfolio to take advantage of any short-term mispricing we see on the back of any additional news or data.

PRESENTER: Sahil Shaikh, thank you. And do keep an eye out for other monthly updates on multi asset investing here on asset.tv. From all of us thank you for watching, goodbye for now.