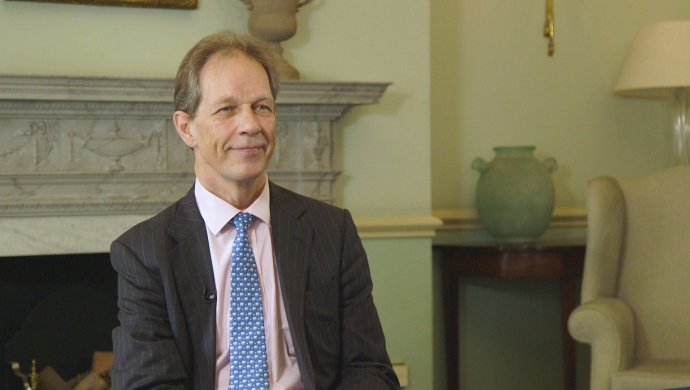 WATCH LATER
Andrew Bell, CEO, Witan Investment Trust plc, discusses what drove underperformance in 2018, why active management was difficult, why and how Witan uses gearing, managing through Brexit uncertainty and his outlook for 2019.

Contact Us
Visit Website
PRESENTER: Joining me now is Andrew Bell, CEO of the Witan Investment Trust PLC to discuss the trust’s full year results for 2018. So, Andrew, Witan’s net asset value total return in the year to the 31st December 2018 was minus 8.4%, whilst the share price total return was minus 8.1% underperforming Witan’s benchmark by 1.9% and 1.6% respectively. So can you explain what drove the underperformance in 2018?

ANDREW BELL: 2018 was a trying year for equity investors. And it wasn’t so much what drove the underperformance; it’s what failed to drive outperformance. Normally we rely on or expect our external portfolio managers to deliver a level of outperformance that covers our running costs, and then some, because we want to deliver outperformance for our investors. And in markets which are rising, being geared also makes a contribution. Whereas last year our portfolio managers were a very small increment ahead of their benchmark, but not by enough to cover our costs, and being geared in a down year also cost us. But both things really counted against us, but relatively unusually for us.

PRESENTER: Global equity markets were volatile in 2018 and had a weak fourth quarter, what were the reasons behind this?

ANDREW BELL: I think there were a few reasons. One was that at the beginning of 2018 people were pretty optimistic. Growth was accelerating and spreading from the US to other parts of the world, so people were quite hopeful for a good year for markets. And although economic growth was OK last year, it wasn’t as good as people had started the year hoping for. And as we got towards the end of the year people began to be concerned that economic growth was coming under threat from several quarters.

The first was there was a trade dispute between the US and China, which was slow to gather speed, but people began to worry this was going to undermine confidence. The second was there were tensions within the European Union, worries about the Brexit process for the UK, and because interest rates in the US had been rising throughout the year, that put pressure on emerging markets. So all of those things together combined to create an atmosphere of worry for two or three months towards the end of the year, when there was a genuine fear of recession. And the markets, having had two or three really very strong years before then, ended up falling 10% or so in a straight line at the end of the year.

PRESENTER: Now, in your review of the year in Witan’s annual report, you say it was a difficult year for active management, why was this and how did your managers perform?

ANDREW BELL: Well active managers tend to concentrate on the specific merits of particular companies, and how they’re going to grow their business and prosper over the medium term. So it’s the fait accomplis that determines the return that you get on the investment. 2018 was a year when people were very preoccupied by macro factors. Politics in the US and the UK, the trade dispute, the Fed tightening, was it going to be a recession? And when people look at those rather binary concerns very often the markets tend to move in a lump in the same direction driven by sentiment. And in the end things sort themselves out. But while that process of volatile sentiment is underway, active managers tend to struggle, because what they’re interested in isn’t really what the market’s focused on.

PRESENTER: Witan’s direct holdings portfolio delivered a return of minus 1.4% and 5.1% ahead of Witan’s benchmark, why did this portfolio outperformance and how is it invested?

ANDREW BELL: I think we benefited from the fact that it’s very tightly focused on a number of specialist funds in the listed private equity and the healthcare area. And those funds tend to be very much driven by the fundamentals of their own portfolios and not by the general mood in the market. And it happened last year that they held up pretty well, and one of them, Syncona, which is a UK based leading life sciences company, had a good year from one of its investments listed on the NASDAQ stock exchange. But over time this portfolio is designed to fill a gap that our managers won’t be able to invest in, provided that we think that that gap is worth filling. And last year was happily a time when it paid off. And we’ll keep focusing on trying to ensure that that’s an area that we add value in the longer term.

ANDREW BELL: Yes, our policy is to grow the dividend ahead of inflation, and if possible significantly ahead of inflation year by year over time, and we’ve been able to make pretty decent strides in that in recent years. Obviously nothing can be promised for the future, because what it depends on is the growth in the dividends coming from our portfolio, and also the availability of revenue reserves. If we get two or three really good years on the trot we can put some money by. And then if you’re hit by a recessionary period when dividends fall in the wider market, we’re able to use those reserves to ensure we can raise the dividend even in a bad year.

ANDREW BELL: The reason we use gearing is over the long time we believe that it will add to shareholder returns. But the effect of using gearing is that you’re going to amplify the direction of whatever market you’re in. So you’ll amplify gains in a good market, you’ll amplify losses in a poor market. So what we try and do is to vary our gearing to have more gearing when we think markets look attractive, and to have less gearing when we think markets are less attractive and likely to fall. We won’t always get that right, but over time if we’re able to borrow more cheaply than we’re able to invest in, we can add value to shareholders over time. And our rate of, our cost of borrowing at the moment average between 3 and 4%, and in the medium term we would be very hopeful that we’d be able to invest at a higher rate of return than that.

PRESENTER: The board’s proposed a share split, which will be put to shareholders at your AGM on the 1st of May. Can you give me more details on that?

ANDREW BELL: What we’re proposing for shareholders is that for every share that they hold at the moment, we’re going to give them instead five new shares. And obviously the share price and the net asset value and so forth will adjust to reflect that. You’ll have five shares. The actual fundament value of your investment won’t change. But the intention is to try and help small savers. Because our share price is about £10 at the moment, and if you’re investing perhaps £20 or £30 a month, you could find you’ve got two shares and then £10 left over. So it makes it easier for people to invest small amounts regularly without having too much money just lying idle in their accounts.

PRESENTER: Now, with the ongoing uncertainty of Brexit, how are you managing Witan in this context?

ANDREW BELL: Well while Brexit is clearly a dominant political issue in the debate in the UK at the moment, most of our assets are invested overseas, and our UK managers have a widely diversified portfolio with the ability to concentrate on overseas exposure instead of domestic exposure, so it’s not a major factor in how we manage Witan.

PRESENTER: And finally what’s the outlook for global equities this year?

ANDREW BELL: I think the outlook for 2019 is better than the mood at the end of 2018 suggested. There were a lot of worries which at the time I felt were exaggerated about the outlook for the US trade dispute, about the risk of the US putting interest rates up by too much, about how serious Brexit was as a concern. There was lots of political gloom. And that meant that the markets, having fallen during last year and become cheaper, were also, investor sentiment was also very depressed. And that’s usually a reasonable launch pad for a contrarian investor to think that things might be a bit better than expected. Now a key thing for the coming year is that economic growth needs to remain positive.

So the signs of slowing growth at the end of last year need to bottom out over the coming months. Provided that we avoid a recession, corporate earnings should remain intact and may even grow. And at this level for a medium-term investor I think time is on the side of equity investors holding their investments and enjoying the returns over time. None of that can dilute the risk that at any one time you’re going to have corrections within the markets, as we saw last year. But if you have a correction which isn’t justified by the fundamentals, such as the fourth quarter, there was a very sharp fall in markets. At the beginning of this year investors did a reassessment and felt that wasn’t warranted, and most of that ground has been made up. So I would say for long-term investors it makes sense to stay exposed, but you need to be selective.